The Making of a YOUtilities Challenge
Read Next Blog 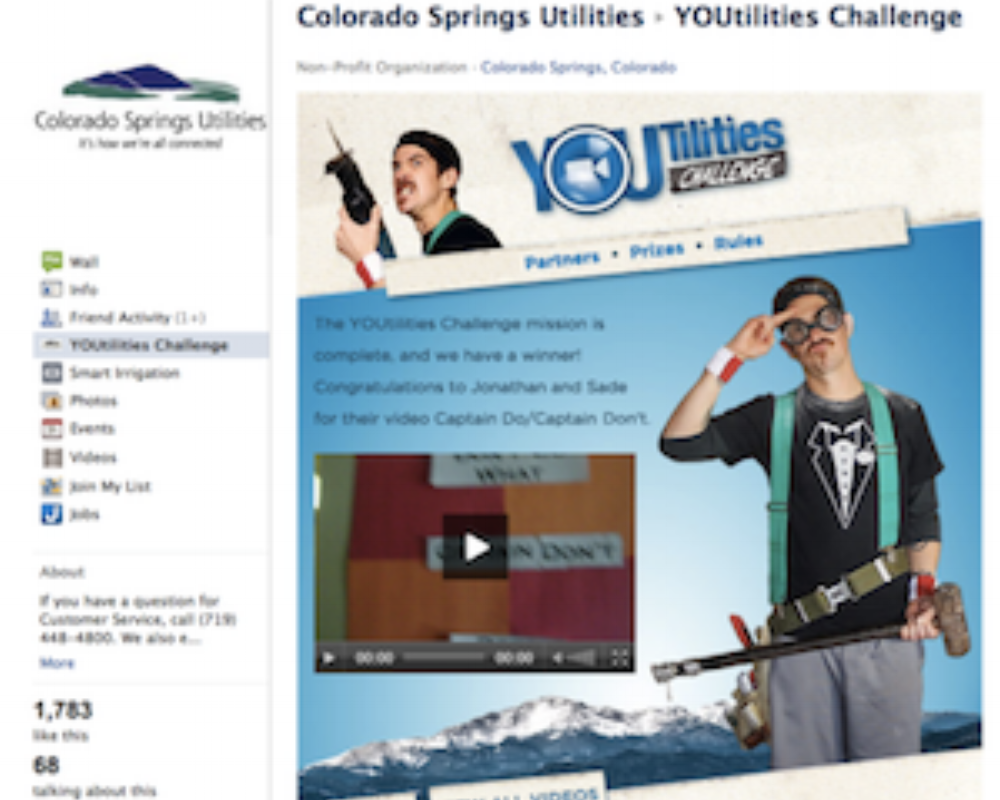 The Making of a YOUtilities Challenge

How did we take a subject that is not overly sexy and convince a community to become consumer advocates for said subject? The answer was an eight-week multi-faceted marketing campaign called the “YOUtilities Challenge” and created by VI Marketing and Branding for Colorado Springs Utilities.

This campaign included various parts, with the most important being a social aspect via Facebook contest hosted on a brand new app designed by VI Marketing and Branding. Developed in accordance with Facebook’s contest rules the app was hosted on Colorado Springs Utilities’ Facebook page. The multi-phase contest engaged customers and invited them to promote energy and water conservation to their friends, family and the general population of Colorado Springs.

To hit the goal of educating Colorado Springs residents about water and energy conservation (which in turn would save them money), our team kicked-off the YOUtilities Challenge with eight weeks of campaign promotions; encouraging residents to engage with the campaign by submitting a two-minute video to the Facebook app. The subject of the two-minute video was to be based on a project or idea all Colorado Springs residents could use in their home to conserve water and energy. After the four-week promotion period, the entrants would be narrowed down to five finalists (chosen by Colorado Springs Utilities representatives). Those five finalists would have a chance to win two months mortgage or rent payments, courtesy of Springs Utilities’ contest partner, Challenger Homes.

While the dozens of entries ranged in subject matter from Xeriscape projects to easy money-saving conservation ideas for your home, the five finalists were narrowed down to include The Energy Efficient Ninja, Captain Do and Captain Don’t, YOUtilities News, The Wind and Sabeys Replace Crabgrass with Veggies.

(Watch some of the videos here)

The second phase of the contest (the remaining four weeks of the campaign timeline) was the voting phase, where all Facebook “Fans” of Colorado Springs Utilities had one vote eligible in choosing a winner that demonstrated having the best ideas/methods for conserving energy. All votes were placed and received on the YOUtilities Facebook app.

To encourage engagement through votes, the five finalists were asked to blog, tweet and post information about their entry or additional conservation tips across multiple social media platforms including: Facebook, Twitter and their personal websites.

Four events were held at Challenger Homes locations throughout Colorado Springs and water/energy conservation experts from Springs Utilities and Home Depot staffed all four events. Utilities customers were encouraged to attend the events to learn more about how they could save money on their utilities bills, meet the finalists and have a chance to win a home insulation installation courtesy of Retrofoam Insulation.

The contest received a total of 1832 votes with the winner, Captain Do and Captain Don’t, receiving 756 votes.