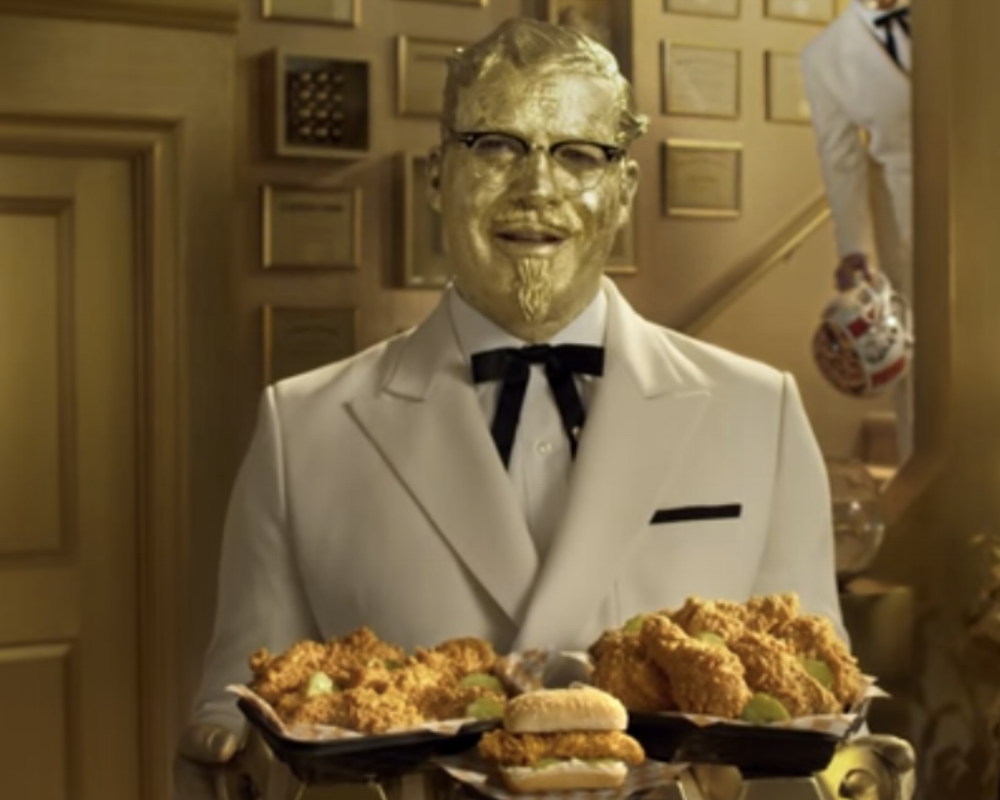 Yesterday, KFC aired their first-ever Super Bowl ad. In honor of the occasion, they had two colonels on hand (Billy Zane and Rob Riggle) to help spread the word about their new Georgia Gold chicken. Zane was introduced as KFC’s newest colonel in late January, just weeks before the Super Bowl. If you’re like most people, you didn’t recognize Zane, as his entire body was covered in gold. But even without the paint, you still might not recognize him. (He was the bad guy on the Titanic.)

Regardless, with the spot, Zane joins KFC’s growing list of colonels — a campaign that started all the way back in 2015. The campaign features different iterations of the colonel as they tie to specific KFC products. George Hamilton made his debut last June as KFC’s Extra Crispy Colonel to promote KFC’s Extra Crispy chicken. Riggle was next. Now, it’s Zane’s turn to strike marketing gold.

From the perspective of an art director, I enjoyed the commercial. The subtle football references, the set design and the humor were spot on. The gold-everything set was nicely done, with a specific nod to all of the detailed items in the background (I wonder if that was a goldfinch in the birdcage?). In the spot, the actual food was downplayed — the humor was a more palatable way to make the spot stand out. Golden strategy.

KFC also strategized to launch the ad early online to hopefully gain some extra attention. To coincide with the spot, they uploaded other teaser videos, as well as various ads on social media to help build up anticipation. Garnering hundreds of retweets and millions of video views, you could call it successful.

Now, was the :15 spot worth forking over millions and millions of dollars? I think so. Studies have shown that companies’ stock prices get at least a short-term boost from advertising during the Super Bowl. I can see that happening with this one, too. If not, at the very least, Georgia Gold chicken sales will get a small boost from at least one gold digger.