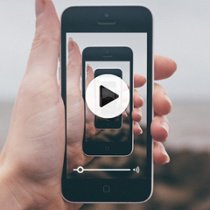 Use Video Re-Engager to Retarget Facebook Users in Custom Audiences

Video, what a great marketing tool in the belt – taking your product or service and fully displaying it to the world. You make this beautiful visual, you put it in front of an audience that will hopefully care, then sit back and watch the phone ring.

Sadly, it’s not 1997 anymore, and as soon as you hit the export function in Adobe, iMovie or something fancier the fun has really just begun. What you sit back and wait for now is the data. That sweet, sweet digital data.
Everyone talks about digital data as if it is some mythical creature that few have actually seen. “Can it track (insert anything)?” someone will ask, and a savvy marketer will it follow it up with “Yes,” before the question is even out of the detective’s mouth.

Data, what a beast. Its definition is as vague as the results of a 2008 QR code campaign, but its power is seemingly limitless – that is, if you actually know what to look for. Let’s take a look at one of the most non-discussed ways to use data as it pertains to video. For the sake of having a name, let’s call it the “Video Re-Engager.”

If you’re familiar with the term remarketing/retargeting then you’ll catch on pretty quickly. If not, let me try to sum it up with this example: retargeting is when you browse some bedazzled shoes on Amazon.com and then for the next two weeks you see nothing but those shoes shown in ads all over the internet. You are being “retargeted” based on an action you took (looking at those shoes) and also because of an action you didn’t take (purchasing those shoes). By browsing at those shoes the shoe company knows that you are somewhat interested in those size 11s, but for some reason or another you decided to switch over to Yahoo Sports and check your Fantasy Football draft rankings and not purchase the shoes. The shoe company will continue to pay (approx. $0.01 per impression) to show you those shoes until you ultimately purchase them or tweet about how annoyed you are for that ad following you around. Make sense?

Now, imagine if that happened to you from a video you watched on Facebook. That’s the video re-engager. You watch videos (to some extent) all the time online. Especially on social. Want to see that cat video compilation of the cucumbers scaring the cats? Just keep watching and let the data add up. Did an Old Spice video randomly just show up in your Facebook feed and you can’t help but watch? It’s time for the video re-engager to start doing its thing.

The amount of time you sit there and watch a video (let’s label that a "Dwell metric"), the more data being gathered on you. As an advertiser you HOPE that every penny you send out on that video is worth it, but let’s be honest, all impressions aren’t equal, and all video views aren’t equal either. If you uploaded a 30-second video and someone watches it for 3 seconds, and another for 25 seconds, which one was more interested? Which viewer would you put money behind to advertise to again?

In the Old Spice example, Old Spice hit a home run with some of its tracked video views (those who watched the 50%-95% of the whole video) and missed the mark on the others (those who watched for 1-3 seconds and then kept scrolling). What should a savvy marketer do? Simply report on the video views and say, “Hooray! We got 2,100 video views!” No, a savvy marketer would say, “Ok, from the 2,100 video views how many actually showed interest and watched for more than just a few seconds? How many watch at least half of the video (850 did. 850 people watched that commercial voluntarily without scrolling on)?” This is where people at large are missing the mark. They simply pop the confetti on the video view numbers as a whole and don’t look at the follow-up.

With the Video Re-Engager you are able to retarget those who watched a certain percentage of your video.

What is Old Spice’s next ad going to be?

You owe it to your dollars. Not to Zuckerberg.