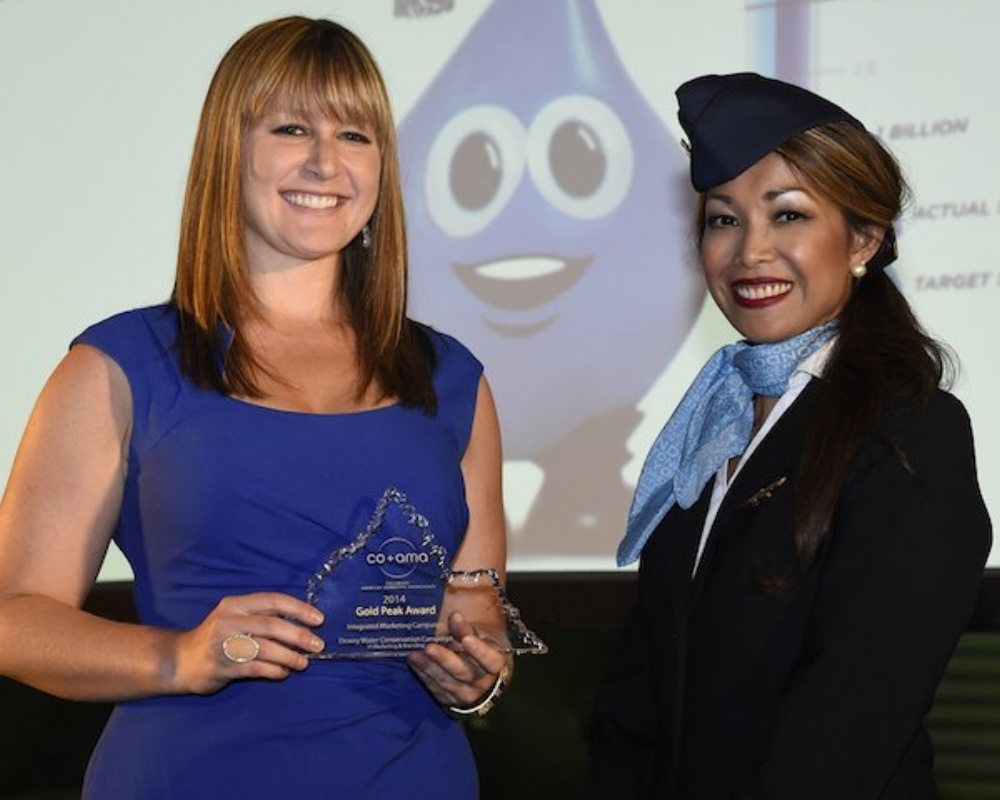 Gasp… can’t breathe… air is so thin… plus I’m FREEZING! Is the climb to the Grand Peak really worth it???

Behind me I hear our fearless leader Erica Rockenstein, also known as E-Rock, yelling “Go! Go! Go! We have to show the businesses of Colorado what we are made of!”

I’m Dewey the Water Drop and this is my story of how the VI Marketing and Branding team climbed two Gold Peaks to summit the Grand Peak… winning Colorado American Marketing Association’s most prestigious marketing award. It has been a long journey, but one we are extremely proud to have made!

It all began when VI’s client, Colorado Springs Utilities, challenged the VI team to come up with a solution to educate the citizens of Colorado Springs about conserving water due to an ongoing drought situation. How do you persuade people to use less of something so engrained in their everyday lives? Something they perceive as having an endless supply?

The team met at the VI base camp, brainstorming over the challenge and developing a strategy of allowing the product (water) to become its own spokesperson in order to encourage the community to rally together to modify their water usage habits. And that is when I, Dewey the Water Drop, was born.

Our team then began their ascent… with copywriters Clay Miller and Bob Lausten giving me a voice. Designers Kregg Lee, Jen Blevins, David Hinds and Preston Herring joined the effort – shaping me into the beautiful water drop that I am today. But I wouldn’t be loved by all until Robbie Repola and Matt Lowery brought me to life through the magic of stop motion animation.

As the ascent continued, media sherpas Renee Harriman and Kari England carried my messaging to the community via newspaper, radio and television ads, social media and public appearances. I even went to a Sky Sox baseball game and did a “rain dance” on a local TV station!

We were finally approaching tree line and the campaign’s goals were in sight. Would we reach them? Yes! Colorado Springs Utilities was 23% over their goal- saving a total of 7 billion gallons during a six month period. Plus, 7,283 residents applied for money-saving rebates that will save the city 100 million gallons of water. AND, 76% of the city knew who I was after just 30 days in action!

As we pushed upwards, the Gold Peak Awards for Integrated Marketing Campaign and Overall Marketing Campaign loomed above us. So close! Would we be able to reach them? Yes! We did it… now just one more Peak, the GRAND Peak, was left to conquer. If we achieved it, it would mean our campaign was the Best of the CO+AMA Peak Marketing Awards.

With baited breath we waited… and the winner is: VI Marketing and Branding! We had done it! All our efforts had paid off. Dewey is on top of the world!
View the Dewey TV commercial below, or click here to see many of Dewey’s other marketing efforts including: rich media, billboards and mailers.