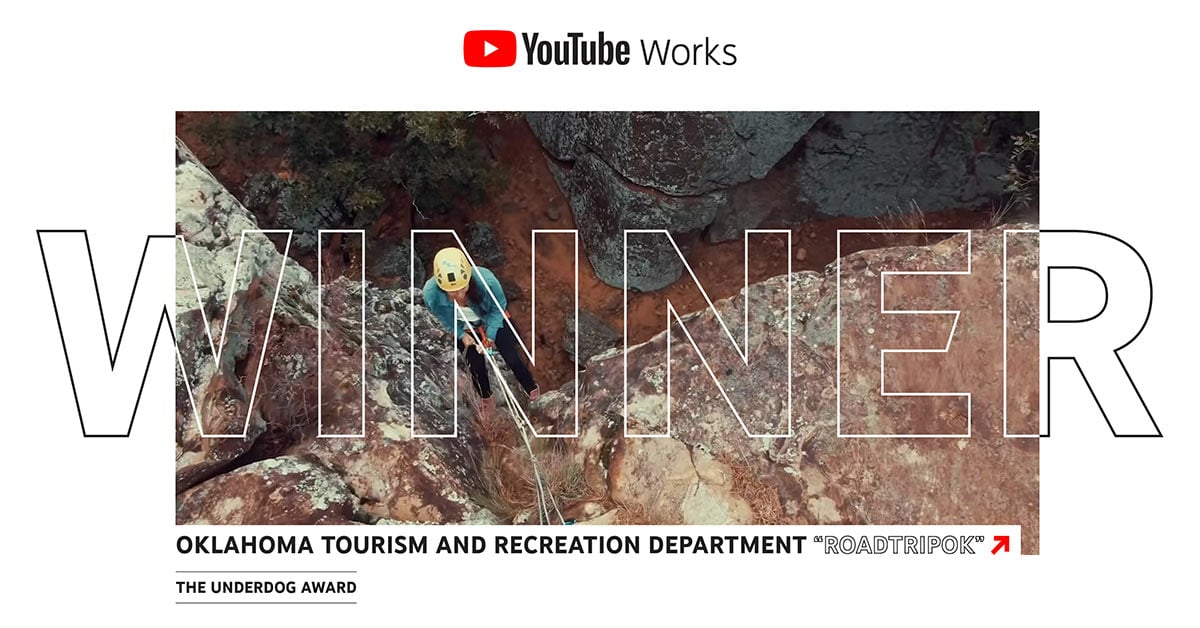 YouTube announced the winners of the 2021 YouTube Works Awards, recognizing the most effective use of its platform in ad campaigns across the country. VI Marketing and Branding, along with TravelOK, won The Underdog award for the #RoadTripOK series.

“I was so honored to accept this prestigious award on behalf of TravelOK and VI. While I was impressed, I wasn’t surprised — Oklahoma is well on its way to becoming a Top-10 state. This is just one of many steps along the journey. I’m so proud of the team and thrilled for our state,” said Oklahoma’s Lt. Governor Matt Pinnell.

The YouTube Works Awards partner with Kantar to champion the brands and teams that produce the most innovative and effective campaigns on YouTube in the past year.

Brands and agencies from across the industry submitted 2020’s most creative, compelling, and effective campaigns to YouTube Works. The panel of expert judges chose seven outstanding winners across nine categories.

VI Marketing and Branding and TravelOK were recognized among some of the most decorated agencies and brands in the U.S., including:

The Oklahoma Tourism and Recreation Department, VI Marketing and Branding and Retrospec Films collaborated to produce and execute a campaign entitled #RoadTripOK, a weekly YouTube series highlighting the state’s magic through a socially distant road trip. With a 33:1 ROI, this campaign garnered almost $7 million in projected lodging revenue for the state of Oklahoma.

"The results were phenomenal," said Josh Faytinger, Senior Digital and Data Strategist at VI Marketing and Branding. "Not only did we see great engagement, but we also saw thousands of viewers subscribe to TravelOK’s channel and watch several more episodes of the series. We achieved all of this with a modest investment and a really innovative idea."

The campaign received The Underdog award, which celebrates a campaign in which a small or medium-sized brand pursued big-brand ambitions and achieved business results to match. VI Marketing and Branding used YouTube tools and regional targeting to promote the state in a relevant and safe way during COVID-19, while engaging and entertaining viewers — all on a limited budget.

“I really appreciated the amount of content created and the weekly programming. I thought it was a really well-done program from the standpoint of a small team and how they utilized YouTube really well," said Kimberly Doebereiner, Director, Future of Advertising, Procter & Gamble.